In November of 1963, young American avant-garde composer William Sydeman was enjoying his major debut. Erich Leinsdorf was conducting a performance of his “Study #2” by the Boston Symphony Orchestra. During the performance, word made it to the concert hall about JFK’s assassination. Leinsdorf stopped the performance and made the announcement to a stunned audience. Leinsdorf found copies of the sheet music for Beethoven’s 3rd symphony, and led the orchestra in a performance of the slow movement- the funeral march- in memoriam. You can read more of the story here as well as hear part of that broadcast.

Three years later, to mark the third anniversary of JFK’s passing, Sydeman debuted a new piece called In Memoriam: J.F. Kennedy. It features a young-sounding EG Marshall reading from a speech of Kennedy’s. Once again, as in the interrupted broadcast, the performers are the Boston Symphony conducted by Erich Leinsdorf.

According to the liner notes, this performance was recorded live over the radio. Volume levels are a little erratic, I did my best to level them out. I do hope you enjoy this stirring piece. 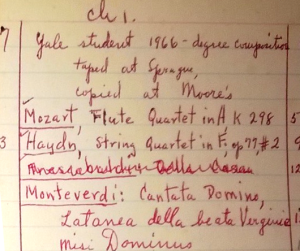 This is the most interesting of my early finds with this collection. Some tapes appear to have been recorded with a portable recorder, then re-recorded onto the larger reels in this collection. Understandable, they wouldn’t want to lug their 50-pound Ampex two-track to Sprague Hall, Yale University School of Music for this performance. According to the sadly brief note, this is the performance of a student’s composition in 1966, “recorded at Sprague, copied at Moore’s.” The only evidence I see at the moment of a “Moore’s” in New Haven is a restaurant called Archie Moore’s. Moore could just be a friend or a hobbyist.

The composition is thoroughly of the 20th century avant-garde strain. It seems the collector’s interest fell firmly in that area- there is a fascinating tape devoted entirely to the avant-garde and musique concrete. Also it was recorded in stereo- I’m getting the idea if a tape is in stereo, this collector valued it.

Without further ado, here is the student’s composition, clocking in at over 20 minutes: